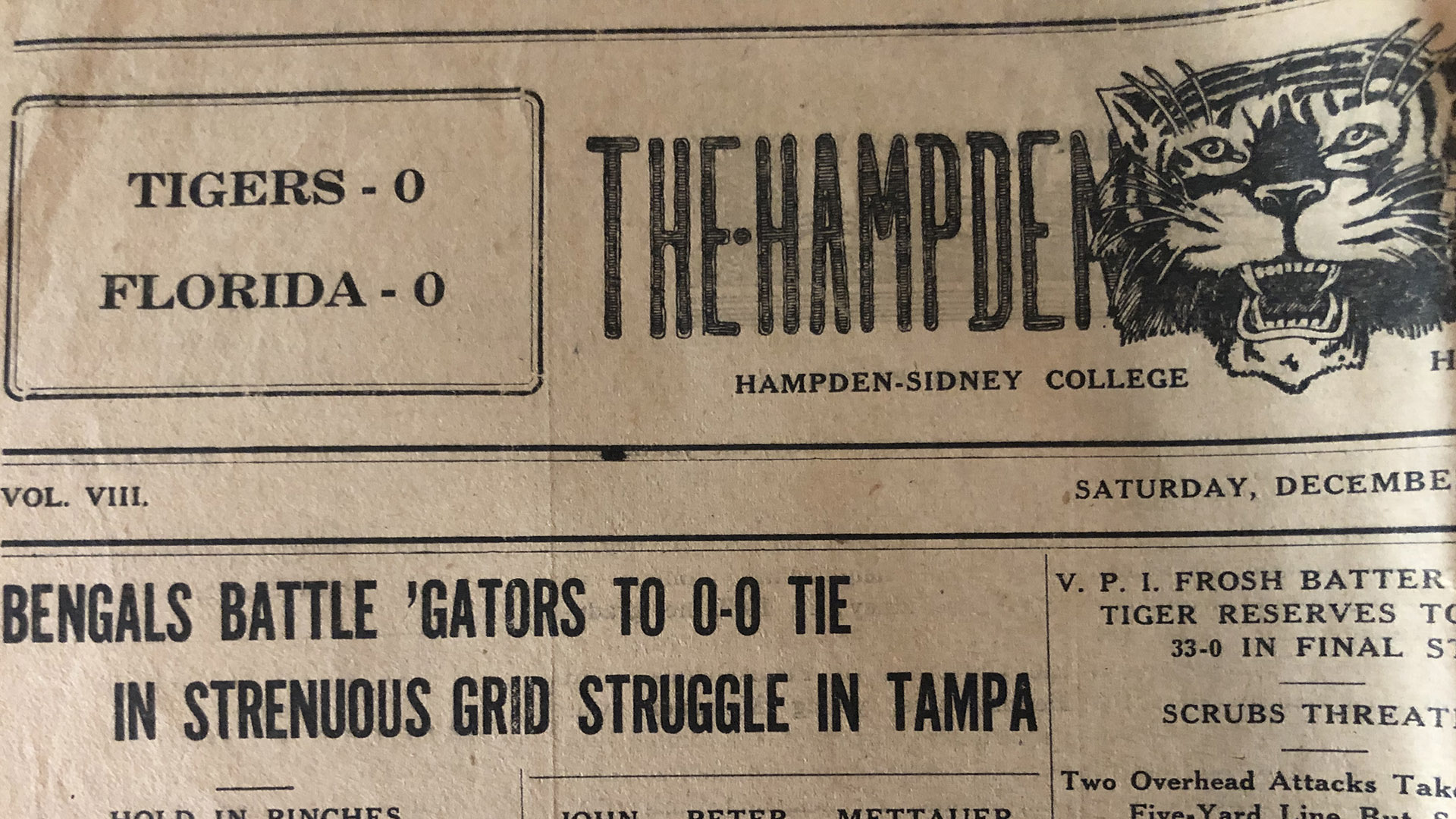 The year was 1926. Calvin Coolidge was president. Hampden-Sydney College was in its 150th year of existence, and spirits were high on the Hill. Not actual spirits, though, as America was in the heart of Prohibition. But a few nickels could buy a gallon of gas, which was a good thing because the Tiger football team logged over 5,000 miles on the road that season.

The “gridders,” as they were often called in those days, were at the time a particular point of pride at H-SC.  In the spring of ‘26, Hampden-Sydney fielded the first spring practices in program history. And with a spirit today’s H-SC fans would appreciate, alumni, students, and guests descended upon the Hill for game day—despite the fact that it was just an intra-squad scrimmage.

There was good reason for this unprecedented preparation, as the Tigers faced the most daunting schedule in program history.  The season began in Charlottesville against UVA, followed by a trip southwest to Blacksburg to face the “Gobblers” of Virginia Tech.  Of course, the schedule wouldn’t have been complete without a meeting of the oldest small college rivalry in the south, pitting H-SC against Randolph-Macon.  The now defunct teams of Lynchburg and Roanoke proved worthy adversaries before the Tigers invaded North Carolina to face Elon and reigning state champion Davidson.  Another heated rivalry with Richmond (who was H-SC’s first-ever opponent) rounded out the games in the Commonwealth, before the Tigers migrated south—766 miles south, in fact, to Tampa, FL.

Rivalries and backyard foes aside, these lads had their eyes on a November showdown with the University of Florida. Yes, the same University of Florida that has since won three national championships. In the 1920s, it was quite common for small schools to play larger schools. (They also played with leather helmets, and a “forward pass” was considered a bit razzle-dazzle, so indeed much has changed.) An August 10, 1926, UF season preview in the St. Petersburg Times called the Hampden-Sydney squad “dangerous.” The two schools had met the previous year, and “such friendly relations sprang up” that the schools decided to meet again.

An estimated 10,000 people attended the showdown between these two historic programs, including an impressive number of Hampden-Sydney faithful.  One account remarks that many graduates of other Virginia institutions came out to support H-SC. When the game began, it was clear that the Gators were the speedier team, moving the ball with relative ease. The Tiger defense buckled down, however, and two first-half goal line stands kept the game scoreless. (Indeed, the H-SC defense answered the call throughout the ’26 season, giving up just 40 points on the year.)

While the second half found the Tigers hitting their stride, one inopportune fumble kept them from taking the go-ahead touchdown. The game would end in a score of 0-0, which is perhaps the most 1920s score ever (one of three scoreless ties for H-SC that season). The Gators outgained the Tigers 265 yards to 240, but the lads in garnet and grey certainly held their own.  Their showing was so impressive, in fact, that Hampden-Sydney was invited to play the University of Havana in Cuba. That would have been one heckuva road (ahem, boat) trip, but it never came to fruition.

While the Tigers have never played another game against the Gators, perhaps it’s time to renew the rivalry. Odds are good that it won’t end in a 0-0 tie (given this new-fangled overtime thing and all), but we’d like to think that ol’ H-SC would put up another valiant fight. Of course, the Tigers may require more than a few leather helmets this go-round.