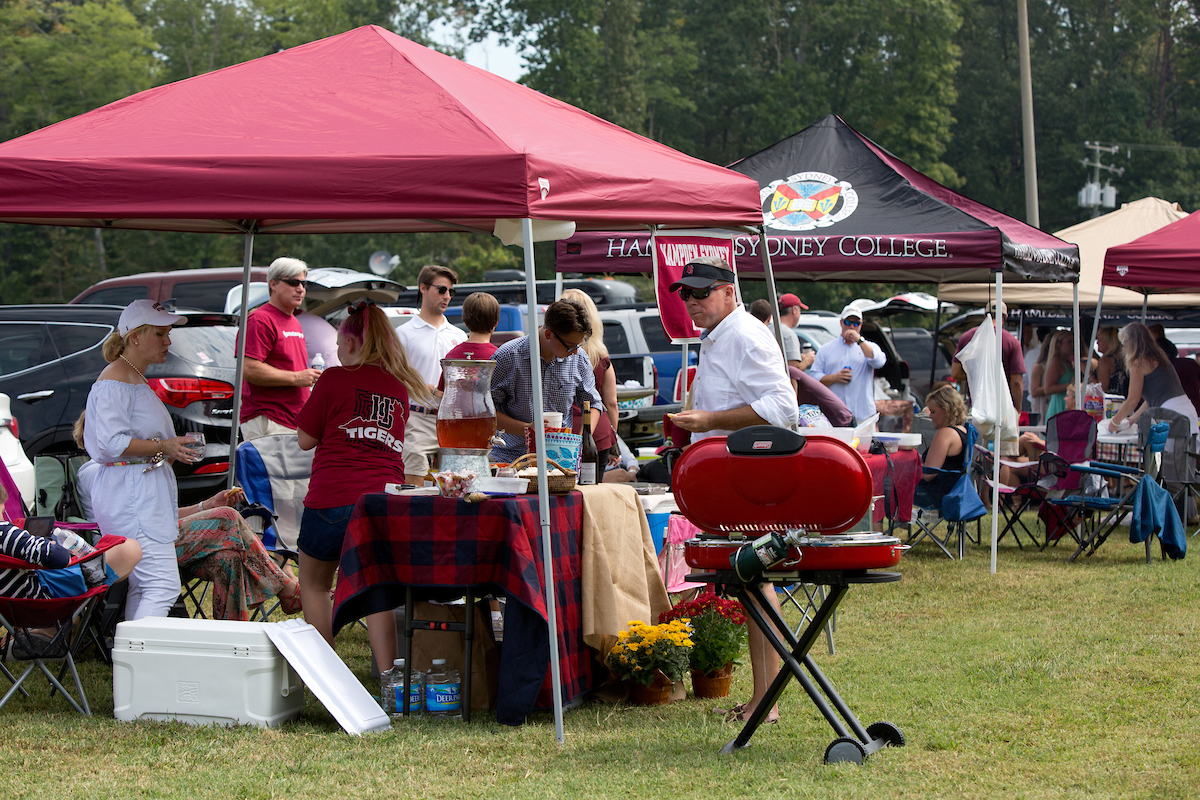 Autumn in America is about many things: falling leaves, milder temperatures, and for some confused people, pumpkin spiced lattes. But if there’s one thing above all that defines fall in college towns, living rooms, and backyards from sea to shining sea, it’s football.

And on Saturdays in certain locales like Hampden-Sydney, Virginia, football is synonymous with another fall-defining tradition: tailgating.

Whether you’re cheering on the Pittsburgh Steelers or the Hampden-Sydney Tigers, here are some tips to ensure your tailgate is a can’t miss event for everyone you know (and even those you don’t know. Yet.):

Don’t be the guy who brings the tasty meatballs but no toothpicks. Nobody’s got time for meatball fingers. Make a list of everything you need, and even things you just might need. Utensils, napkins, paper towels, ice for the coolers, enough food and beverages for more than your expected number of guests. Folding tables are golden, and bring a few chairs for anyone who might want to get off their feet. Pro tip: Keep a supply of trash bags in your car. If you respect your team, you’ll respect their tailgating area–and leave it as you found it.

Sure, some guys tend to just have more gear than others. Even if you’re not the guy with everything, be purposeful and even creative about your tailgate. If you’ve got a big pop-up tent with your team’s colors, throw that thing up proudly. Table cloth to class up your setup? Go for it. Have a buddy who always says if coach had put him in, they’da won state? Bring a football so he can prove it. Want some tunes to enhance the experience or the ability to listen to another game broadcast before the Tigers take the field? Don’t forget that Bluetooth speaker. Got a competitive streak? Cornhole boards will bring the party to your spot.

Don’t shirk on the menu.

Everyone gravitates to a guy who can cook, and especially one who takes his craft seriously. In other words, don’t just phone it in with a couple of charred burgers and a bag of chips. Check out recipe books like Tailgreat, authored by James Beard Award-winning chef and Hampden-Sydney alumnus John Currence ’87, for some inspiration on food prep and dishes. And if cooking’s not your thing, fear not. Order some tasty take-out from your favorite spot. Spreads at H-SC often feature huge platters from Bojangles and Chik-fil-A.

Whether you’re at the Denver Broncos’ Mile High Stadium or the Tigers’ Everett Stadium, you’ll find a lot of people and a lot of tailgates. As soon as you’ve ID’d your location, let your friends and guests know where you are, and be clear with identifying landmarks (I.E. “We’re in the shade of the big oak, east of the stadium, under the blue tent with the H-SC logo. If you see the guy with the green hat, you’ve gone too far”). By the way, Tiger lacrosse alumnus Mac Freeman ‘89 runs Mile High Stadium as the Broncos’ chief commercial officer.

Dress for the occasion.

Whether your style is old school or new school, be sure to show a little pride, both for yourself and your team. Old school folks might prefer a college tie and a blazer. More casual guys may rock a Tiger polo or a Hampden-Sydney tee. Keep an eye on the weather and have a warm jacket or raincoat on hand. Shower in the morning and dress with purpose: You never know if that distinguished-looking alumnus waiting for the next Porta John leads a Fortune-500 company. Oh, and wear sunscreen.

Want your tailgate to be a family affair? Make it a potluck spread, and encourage your friends to contribute food, beverages, and even gear you might need. This requires a little bit of coordination so you don’t end up with six plates of chicken salad sandwiches or all spoons and no forks, but it’ll be worth it.

Remember, it’s a marathon, not a sprint. If you’re getting out in the sun early in the morning, even a 1pm kickoff will keep you hanging till early evening–or even longer, if the post-game concerts at fraternity circle or Chalgrove Point are your thing. Bring enough water for yourself and your guests—and drink it throughout the day.

Obviously, we love the tailgate. You may even have brought some hand carved mallard decoy or your grandad’s leather football helmet as a memorable centerpiece to your spread. But don’t forget the true centerpiece of the day’s action: the game. The players have practiced and fought hard to represent your colors on the field. They’re the reason you’re there, so get out and support them!

Be a good citizen.

In addition to picking up your trash, be a team player in the truest sense of the word: as a fellow citizen. Don’t blare your music too loud. Show respect to the opposing team’s fans and visitors. In fact, treat them so well that they question their own allegiance. Oh, and be nice to the refs.

Come check out a game at H-SC and learn about tailgating from some real pros. Find a home game on the Tiger football schedule here.

Fun Fact: Hampden-Sydney has been ranked among the top tailgating schools in the nation by Southern Living magazine. Seriously. This is a place where you get a big school social scene combined with the personalized education only a small college can offer.

Another Fun Fact: Alumnus Rob Citrone ‘87 is a part-owner of the Pittsburgh Steelers.

Top-5 Trails in the Heart of Virginia