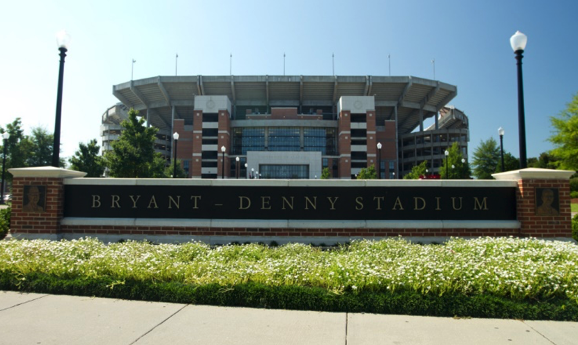 If you know anything about college football – especially SEC football – you’re familiar with the legacy of George Denny ’91. Or you should be.

This Hampden-Sydney alumnus was responsible for the meteoric rise of the University of Alabama football program. Love ‘em or hate ‘em, there’s no denying the success and significance of the Crimson Tide in college football history.

And if you want to see a meteoric rise, check out the trajectory of this dude Denny:

1891-1896: Graduates from Hampden-Sydney, earns a Master’s Degree, obtains his Doctorate from UVA

1896-1899: Serves as professor and football coach at Hampden-Sydney

1899-1900: Teaches at Washington & Lee briefly before they make him PRESIDENT at age 30. That’s right: Our guy was there less than a year before they put him in charge. Talk about some leadership skills!

1901-1911: Leads W&L during what was labeled “the most successful decade in the history of the college” (you’re welcome, Gennies).

Ultimately, in 1911, Denny takes his talents to Tuscaloosa to become president of the University of Alabama. This would prove to be a defining hire for the University. The school consisted of 652 students and nine buildings when ole George arrived. By the time he retired in 1936, there were over 5,000 students and 23 buildings.

Speaking of buildings, two of ‘Bama’s most prominent campus structures are named for Denny:

When a rumor circulated that President Denny was considering heading back to Virginia, Denny Chimes was constructed to honor him. And in a nod to his roots, the tower was built out of bricks from the Commonwealth. Today, Denny Chimes remains one of the main campus focal points.

His name also graces the home of the Crimson Tide football program: Bryant-Denny Stadium (formerly Denny Stadium).  There is good reason why Denny is one of the only college presidents in the SEC with his name on a football stadium.  He was one of the first leaders to realize that a respected athletic program—particularly football—would improve the strength of the entire university.  His attention helped Alabama become a national powerhouse, winning their first four national championships during his tenure as president. More importantly, Denny helped give rise to the popularity and prestige of college football.

Known around Alabama’s campus as “Coach,” George Denny combined superb leadership skills with a visionary mindset and creative execution—leaving an indelible impact that is still felt today.  Hats off to this historic Hampden-Sydney Tiger.